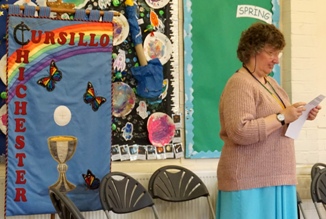 When I was asked to give this witness talk my reaction was ‘Help! How do I condense all that happened into 10 minutes?’ I will do my best. In 1996 God brought my Danish friend Lone and myself together in India to lead a ‘Children’s & Youth ministries training school’. During our breaks I began to read a secular book called ‘Peking’. In it the author gives a vivid and very accurate description of the events of the ‘Long March’.

It was a mandatory 6,000 mile retreat through some of the most rugged country in China. It cut right across the south and then up the west of China to the north. At the beginning Chairman Mao stood in danger of being left behind to face certain death, by the end he had been elevated to the position of political leader. Many events took place along the March that have had a lasting and profound impact on China.

God spoke to me as I was reading and said that these events needed praying into – for as the Long March lay across China like a deep wound. When I finished the book, I passed it to Lone to read and said, ‘If this is true then it needs praying into’, I was thinking of sitting comfortably at home praying with a small group on a few occasions. By the time Lone had finished reading she agreed the events needed prayer, but not from the comfort of home; we were to place our feet on the ground and God would give it into the hands of His people.

Lone asked me to research the story to find out what was true. There were many accounts including one by a Christian missionary who was forced to go with the Communists to be sold for ransom. We split the Long March into 7 sections each of which we allowed 5 weeks for. The first week was spent preparing ourselves spiritually and culturally and the other 4 were travelling intercession.

Our first team came in December 1997 from South Africa. They had never seen snow before and spent 4 weeks travelling in -40°c across north China. We used the normal bus routes to get around and went to villages so remote that the whole village would follow us, as they had never seen foreigners before. One of the bus routes on this first section went along a frozen riverbed. Part of it wasn’t fully frozen and it became quite unnerving sitting watching the water rising rapidly up the foot deep step inside the bus.

Over the years we had many more teams come from all over the world to take on the other sections. Eventually teams stopped coming but there were still 2 sections that had not been covered. My eyesight had deteriorated and Lone had got married and had a young family. We laid the project down in God’s hands and left it up to Him as to what happened next.

In 2011 God started talking to Lone about completing the project. She asked me to pray about going with a team. My initial reaction was ‘You’ve got to be joking!’ It didn’t take long for God to change my mind as I saw it was His idea. Several things happened to delay our travel until 2014. During the intervening years we had regular times of intercession for all the practicalities and the places we would travel to. During that time God gave us many words and promises, confirming His plans.

One of the words God gave was about providing a highway in the wilderness. As we travelled through Sichuan Province we found this to be literal. Instead of the dirt tracks of previous journeys during the intervening years expressways had been built which often ran on stilts round the sides of the mountains. As we were preparing to leave God spoke to us through Sandy saying the first steps are always the hardest. Just days before we left 4 of our 6 person team finally got our China visas. The other 2 had to fly out to Hong Kong and trust God would supply them there. We felt like Peter ,might have felt when stepping out of the boat to walk across the water to Jesus. All the time He held our focus we were ok but if we looked at the circumstances we started to sink.

We arrived in Hong Kong at the end of September 2014 just as the first pro-democracy demonstrations were taking place. We felt it was a great privilege to be there at such a strategic time and to be able to join with the local Christians in prayer.

On our first Sunday inside China we were greatly blessed by being able to take communion with the lively ex-pat congregation in Chengdu. There was a sad announcement during the service to say it was illegal for a Chinese citizen to attend; they had to go to the official church. In practice this meant that any ex-pat that married a Chinese person was prevented from worshipping as a family.

Our team consisted of 3 adults and 3 children. Because of this – going around China – we felt we couldn’t openly worship God and pray for fear of the consequences, this was hard to accept. It fuelled our prayers and made us thankful for those who are willing to chance much more than deportation to bring a sacrifice of worship to God. I long for the day when it will be possible to openly worship God throughout China. I believe God has used the prayers of the teams to cleans the wound across China and it now has a chance to heal.

There are 2 main lessons I have learnt through this. God is faithful and God will complete what He starts even if His timing differs from ours.

My relationship with God has grown much deeper as I saw Him accept my small offering, multiply it and use it to accomplish far more than I thought possible. He was not limited by my weakness but used it to His glory.

This site uses functional cookies and external scripts to improve your experience.

This website uses cookies to improve your experience while you navigate through the website. Out of these cookies, the cookies that are categorized as necessary are stored on your browser as they are essential for the working of basic functionalities of the website. We also use third-party cookies that help us analyze and understand how you use this website. These cookies will be stored in your browser only with your consent. You also have the option to opt-out of these cookies. But opting out of some of these cookies may have an effect on your browsing experience.
Necessary Always Enabled
Necessary cookies are absolutely essential for the website to function properly. This category only includes cookies that ensures basic functionalities and security features of the website. These cookies do not store any personal information.
Non-necessary
Any cookies that may not be particularly necessary for the website to function and is used specifically to collect user personal data via analytics, ads, other embedded contents are termed as non-necessary cookies. It is mandatory to procure user consent prior to running these cookies on your website.
SAVE & ACCEPT

NOTE: These settings will only apply to the browser and device you are currently using.

Cursillo in the Diocese of Chichester

Keeping us all safe and sound