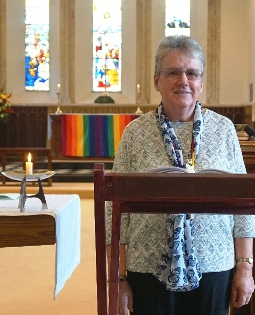 As a small child I went to Sunday School but after a few years I drifted away. I can remember in my early teens wanting to go back to Church but felt I needed a reason so I joined the Church choir (you got paid for attending in those days).

I married a banker in my early twenties and over the next fifteen years my son and daughter were born and I moved house and county numerous times never staying anywhere more than three years and going to Church on and off.

In 1984 I moved to Olveston in Bristol and became a member of St Marys Church. Again singing in the choir.

Three years later I wasn’t to move home again but my life and that of Julie and Carls were to change dramatically. Six months after supporting a neighbour and her children through the death of her husband who had been killed in a car crash my husband decided to leave to be with her and her two boys. I found myself on my knees praying that my marriage would survive. That prayer wasn’t to be answered in the way I wanted. I was divorced and left to bring up two small children on my own.

Looking back now I know that Jesus carried me when the going got really tough, he walked beside me, took my hand and step by step moved me forward.

In 1991 we moved to Bradley Stoke, still in Bristol. For six months  I continued to go back to St Marys, it was a safe place with familiar faces but to become part of  a new Church and community meant moving forward again.

So in 1992 on Easter Sunday morning I walked into a blue portacabin type building on the side of the  road and that was Holy Trinity Church, Bradley Stoke. Well, what a shock, people clapping, waving their arms in the air, marching around the small building singing-I wondered what on earth was going on. I couldn’t get out quick enough at the end. Un beknown to me at the time that was to be a major turning point in my life. For the rest of the  day I knew I had to go back.

In 1993 on the site of the blue portacabin an Anglican based Ecumenical Church and school rose from the ground. I was one of two dinner ladies when the school opened and working with the Christian staff I began to feel that something was missing in my life, but what?

In 1994 I agreed (nervously) to go on a Saints Alive course(similar to today’s Alpha)as the weeks followed I realised I’d never actually asked Jesus into my life, there was a hole that needed to be filled. On the 13th March that year I made my commitment and my life would never be the same again.

There were good times and sad times to follow, my ex husband died of a heart attack aged 52 in 1996.

In 1997 I had the privilege to be allowed to have a full immersion renewal of my baptismal vows, a very moving service.

2005 was another difficult year, in August my brother Philip passed away unexpectedly aged 62 while on holiday in Malta. Just 10 weeks later in October, Myles ,the man I was hoping to marry died from a stroke.   Yes, I asked God why and No, he didn’t answer me. I knew these things  had happened for a reason, one day I can ask why. I never stopped trusting even when I seemed to be clinging on by my finger tips.

For a long time I had watched a few of the younger people in the Church go off to help with projects abroad working with people less fortunate than themselves. I thought I’d like to do something like that, but it didn’t happen. The thought never went away, it kept coming back. So when in 2007 in my 60th year I had the opportunity to go to Uganda to work with street boys I knew it was God’s will. It was an amazing three weeks and very hard work. They had no material things but their faith was astoundingly strong. It was a truly humbling experience of which I could tell you a lot more but I’ll move on.

Having decided to retire in early 2011 I felt God was telling me that out there somewhere there was something else for me to do but I didn’t know what, only that I had to put my complete trust in him and move away from Bristol but where to?

I’d always wanted to go back to live near the sea as I was born in Hastings and spent my first 23 years in Battle. For 18months I travelled up and down the south coast looking at different areas. It was my niece who suggested I looked at Pagham, bungalow city she called it(I’d never heard of it).

And so it was, with one failed purchase, I was on the brink of giving up but God wasn’t having that. In June 2012 age 65 I packed the car ,left Bristol and my daughter and not knowing a single person arrived on the drive of my new home.

Having to wait till lunchtime for the keys to be brought to me, I was leaning on the car in the sunshine thinking I’ll go to the beach cafe for a coffee. A lady passing with her dog on the other side of the road called out and asked if I was ok. I explained the situation and she immediately said “would you like to come home with me and wait” I did decline her offer, but she didn’t know me at all. I felt this was confirmation that everything was going to be ok.

I met Sue while registering  the next day at the doctors. It was all go ,the  day after that was the annual village afternoon tea. I knew that nobody was going to knock on my door and say “do you want to be my friend” so stepping out of my comfort zone I walked into the hall, it was all too much, I burst into tears and said to the lady on the door “I can’t do this”, “yes you can” she said “go and sit with those two ladies they will talk to you” and so they did. About to leave after my tea, Sue appeared and asked (seeing I was wearing a cross and chain) do you go to Church, I said I was going to St Thomas a Becket in the morning and I was now going home. No you’re not, your coming with me, she took me to the vicarage to meet the new vicar, his family and other church members one of which was Pauline. Sitting with  Pauline and Sue on the Sunday morning I felt so blessed knowing that God was with me every breath and step I took.

Lots of things have happened in the 4 years I’ve been here, some good, some sad, some challenging but all a part of Gods plan for me.

Visiting a Cursillo Ultreya, Keith chatted to a few of us while the others were having the group reunion, after that I knew this was something God wanted me to be a part of. In May 2015 I went on my Cursillo weekend. Wow what an amazing out pouring of love. I enjoyed it so much I’m going back to staff on Chichester#28 next May!

I can’t express how blessed and happy I am that God guided me here to Pagham to be amongst such loving and caring people. Every day I look out of my window into the garden and thank him for his creation and everything he is doing in my life, how grateful I am That I took that step of faith into the unknown.

All my experiences so far are enabling me to journey deeper towards the heart of love, that is God.

This site uses functional cookies and external scripts to improve your experience.

This website uses cookies to improve your experience while you navigate through the website. Out of these cookies, the cookies that are categorized as necessary are stored on your browser as they are essential for the working of basic functionalities of the website. We also use third-party cookies that help us analyze and understand how you use this website. These cookies will be stored in your browser only with your consent. You also have the option to opt-out of these cookies. But opting out of some of these cookies may have an effect on your browsing experience.
Necessary Always Enabled
Necessary cookies are absolutely essential for the website to function properly. This category only includes cookies that ensures basic functionalities and security features of the website. These cookies do not store any personal information.
Non-necessary
Any cookies that may not be particularly necessary for the website to function and is used specifically to collect user personal data via analytics, ads, other embedded contents are termed as non-necessary cookies. It is mandatory to procure user consent prior to running these cookies on your website.
SAVE & ACCEPT

NOTE: These settings will only apply to the browser and device you are currently using.

Cursillo in the Diocese of Chichester

Keeping us all safe and sound